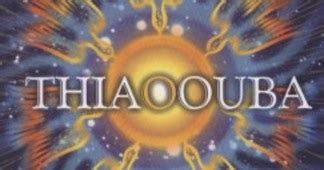 AUDIOBOOK with audio cleaned by Ai. The quality could be better:

In June 1987, Michel Desmarquet (1931-2018) was chosen to make an interstellar journey in our galaxy and visit Thiaoouba. Michel was entrusted with the mission of writing a book containing the most important message to Earth's inhabitants in the last 2000 years.

Thiaoouba יהוה is the most common word in the Old Testament (Genesis, Exodus etc...). It is the name of “angels”, who turned the cities of Sodom and Gomorrah into the Dead Sea, helped Moses lead the Hebrews out of Egyptian slavery, and who gave Moses the ten commandments ~3,250 years ago.

Michel's journey took place by a so-called “trans-substantiation”, which involves leaving spacetime and returning to it elsewhere in our galaxy. The book, Thiaoouba Prophecy, contains Michel's detailed account of this journey.

This book clarifies practically all myths, doctrines, and mysteries on Earth and reveals clear logic, beauty and majesty of the Universe, in which every one of us has an important role to play.

There are no theories in this book. No wishful thinking or products of imagination of the author. This is an exact witness report of the Reality of the Universe.

No matter how much we insist on defending our current beliefs, doctrines and traditions, nothing can change the truth and the order established in the Universe. Rivers will always flow from their sources towards the ocean, even if a religion, a sect, or billions of people want to believe the opposite.

“Man exists physically for the sole purpose of developing spiritually...”

“...the destruction of your entire planet that is at risk—with no second chance if you don’t place your trust in those who want to help you” (this is a 1987 warning)

“...sometimes a planet will disappear in a solar system...”

“...most responsibility is taken for the physical body, but this is a serious mistake...”

“If you make a mistake, you pay the penalty—immediately, in ten years time, or in ten centuries time, but errors must be paid for”

"Finally, I’d like to finish by saying this: as the humble servant of Thao and the
Thaori, who requested that I write this work, I want to remind you, for the last
time, that whatever religion there is and whether you believe in one thing or
another, that will in no way change what has been established by the great SPIRIT,
GOD THE CREATOR - You can call HIM what you like.
No religion, no belief and no book, not even this one, will affect the truth and
the order established by HIM in the universe.
Rivers will always flow from their source towards the ocean, even if a religion, a
sect or billions of people want to believe the opposite.
The only TRUE, IMMUTABLE thing is the law of the CREATOR, the one He
WANTED in the beginning, the UNIVERSAL Law, HIS LAW, and absolutely
NOBODY will EVER be able to change that."
M. J. P. Desmarquet.
Cairns, Australia, April 1993

I have written this book as the result of orders received and which I have
obeyed. Further, it is an account of events that happened to me personally - this I
affirm.
I imagine that, to some extent, this extraordinary story will appear to some
readers as science fiction - a story entirely invented - but I do not have the
imagination that such a fabrication would require. This is not science fiction.
The reader of good faith will be able to recognise the truth in the message I
transmit from my new friends to the people of the planet Earth.
This message, in spite of numerous references to races and religions, reflects
neither racial nor religious bias on behalf of the author.
Michel Desmarquet,
January, 1989
They have eyes but they do
not see - ears, and they do not
hear...
The Bible